Other "Carvilles" and imaginative uses of streetcars: 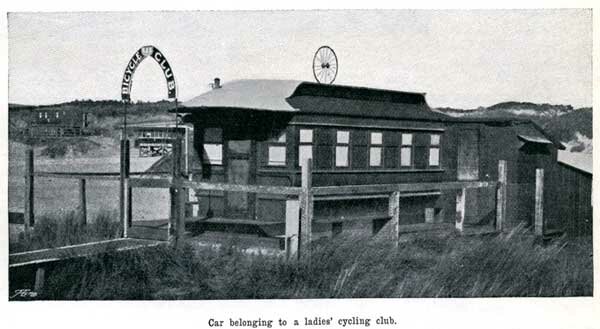 Another view from the British edition of Pearson's Magazine of 1898 from Dennis O'Rorke. I had seen a poor version of this photograph of the Falcon's Cycling Club car (note bicycle wheel on top!), but this is much clearer. Too bad I didn't have it when I was creating the book! (See page 32-33 for more on the Falcons.)

Beachside and the Annex

Thanks to Dennis O'Rorke, who found an article on Carville in the British edition of Pearson's Magazine of 1898 (so far, month of issue unknown). The author strangely doesn't talk much about Carville, but more about the city's transit system. But the images are wonderful. Above is Colonel Dailey's "Beachside" house on the left, and his "Annex" coffee saloon on the right. (Read more in the book, pages 22-32.) 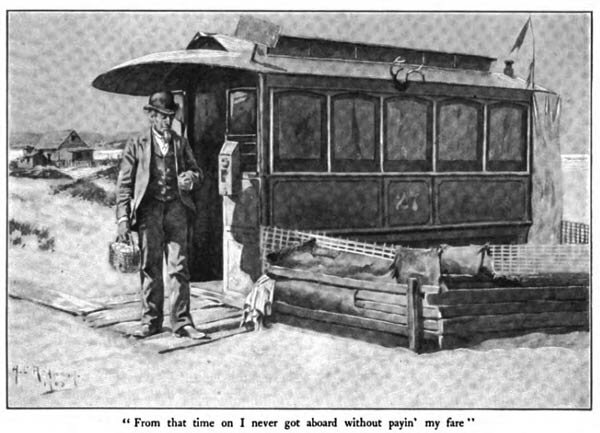 Thanks to Grant Ute, who found the fictional retired car-conductor story (page 71) from Gelett Burgess and Will Irwin's book The Picaroons printed in the August 1903 edition of Pearson's Magazine. The magazine version included illustrations by A.C. Redwood, including the above depiction of the conductor's Carville carhouse. Redwood obviously based the drawing on a real photo of a CP&SPRR car (page 44 in the book), and just changed the car's number from 20 to 27 for the story. 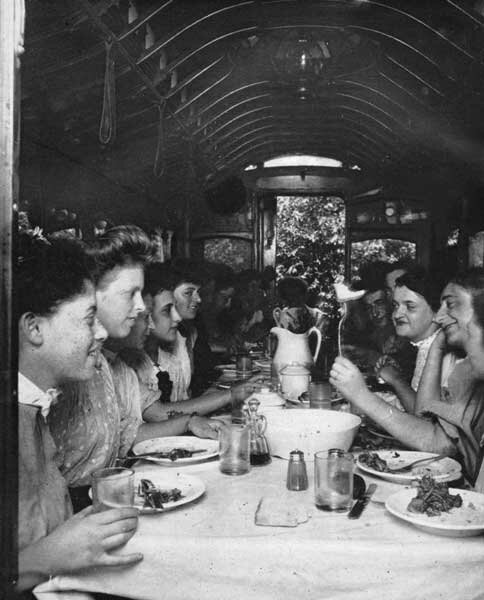 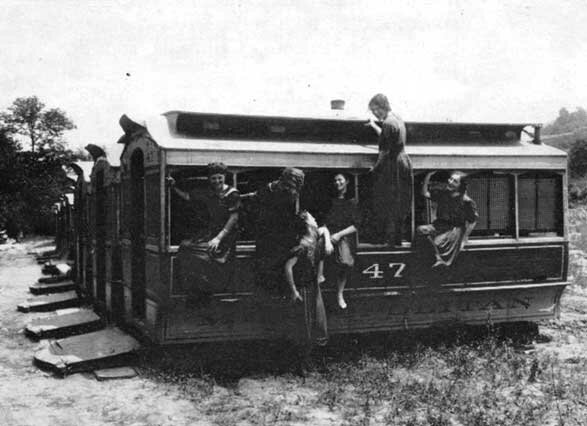 MENDS SHOES IN A CAR
Queer Shop of an Oakland Cobbler 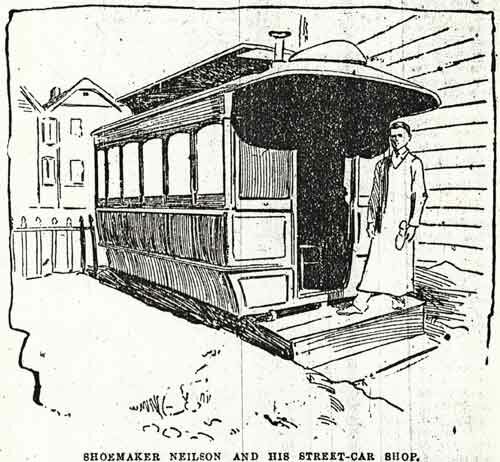 Andrew Nielsen used an old horse car for his shoe repair business on Tenth Street near Kirkham in Oakland, California. The cobbler bought his shop for $3 from the Adeline and Watts Tract Street Railroad when that company moved to electric cars. (Another person bought thirteen cars for $68, but there's no knowing where or what use those cars were put.)

"At night he locks both ends of his car. The front door he braces shut by pushing a piece of wood down between the door and wall. The back door he locks from the outside with a long nail, which he slips through door and frame. It is a very economical lock, as he says, but then who would steal old shoes?"

New Use for old Horse Cars in the East Coast

"...600 old cars that went into disuse are now being utilized for [...] novel purposes. It is stated that along the coast of Long Island Sound, from Watch Hill to Larchmont, these cars may be seen perched up on top of some breezy bluff on the sandy shore, or in some quiet, shaded nook, affording temporary habitation for families, fishermen, hunters, etc."

New to me at least. This month (September 2010) two of my friends were active on eBay and picked up two great photographs of Carville. Joseph Frank Mitchell nabbed this nice image of the first Sutro block at La Playa and Lincoln Way. Interesting structure advertising "Beach House Rooms" on the right: 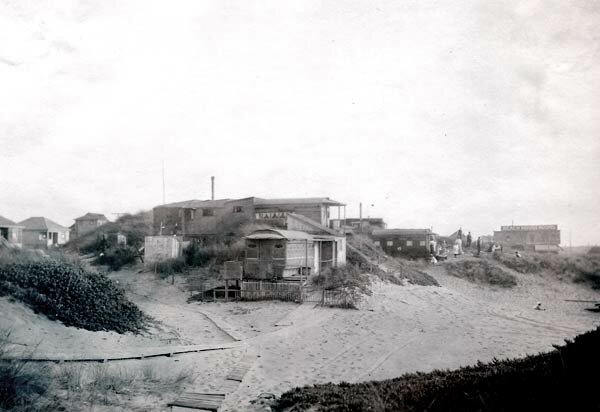 The same day, Dennis O'Rorke sent me this image looking north on the Great Highway between Lincoln Way and Irving Street. 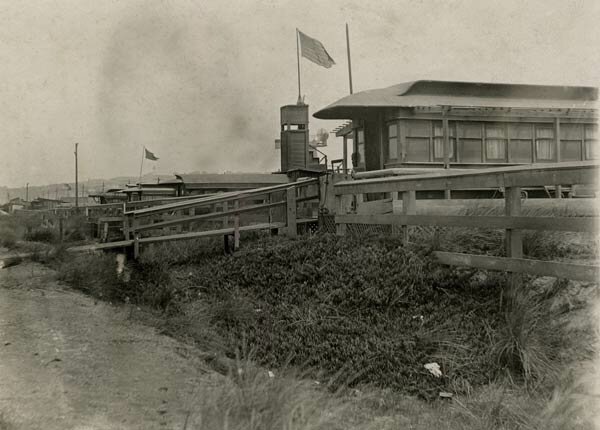 Thanks to both for finding, buying, and sharing these great views!

Carville House on the Move

Jaci Pappas, whose family photos were among the best images in the book, found another interesting one. Here's a car on the move, likely destined to be part of Roy Andrus's carhouse at 1608 48th Avenue (see page 46 of the book). Many people ask how cars were moved out to the community and I guess here's one answer. 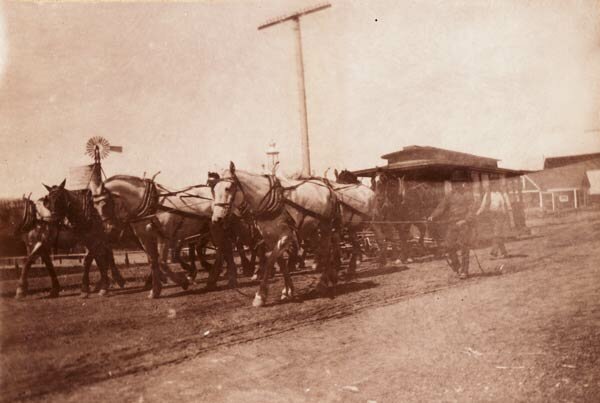 In 1905 Donald Hough's family decided to take three former bobtail cars of the Twin City Rapid Transit Company to create a summer cabin at White Bear Lake in the small town of East Shore Park, Minnesota. When the company instead dumped twenty-two cars on the site, the Hough's were pioneers in another streetcar colony. After four years, their house became a year-round residence made up of seven cars with various non-streetcar additions, and other cars formed rental properties, an outhouse, and a waiting station for a railroad line. Eventually the home became so altered that only electricians and contractors hired to do repairs would be surprised to find sliding pocket doors in the walls. Hough fondly remembered the experience in his book The Streetcar House (New York: Duell, Sloan and Pearce, 1960).

"At Avon Park Heights, Bridgeport, Conn., there are a score or more old Broadway cars, transformed into homes. They were raised upon stilts about four feet high, and two were placed side by side, so that a cottage of two rooms was formed by cutting out one side of each car. The windows in the sides were boarded up, with the exception of one for light, and the doors were fitted to swing instead of to slide to the side." 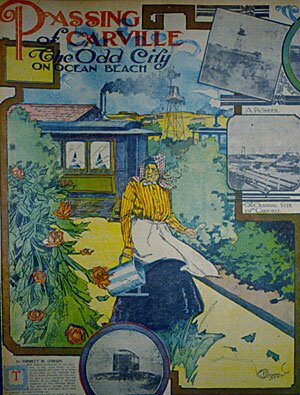 A photograph of San Francisco Chronicle article, "Passing of Carville, The Odd City on Ocean Beach" by Emmett M. O'Brien from March 15, 1908.

So much nicer to see the color of the art by illustrator Wesley DeLappe instead of the murky gray of the microfilm copy. I wish I'd known about the existence of this original copy before the book came out.

Much thanks to Grey Brechin, who photographed this page in a collector's basement years ago and provided the slide for me to scan. 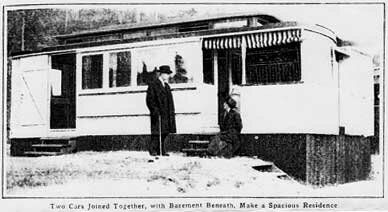 "One ingenious landlord of Seattle, Wash., who is engaged in the business of supplying summer cottages at the beaches, has profitably solved the problem of low rents by buying worn-out street cars from the local transportation company and converting them into bungalows. One car makes a very comfortable cottage, while two joined together with a basement beneath make a residence, which, under the circumstances, may be regarded as spacious. The investment in these homes is small and they are proving popular with city dwellers who seek the beaches in the summer." 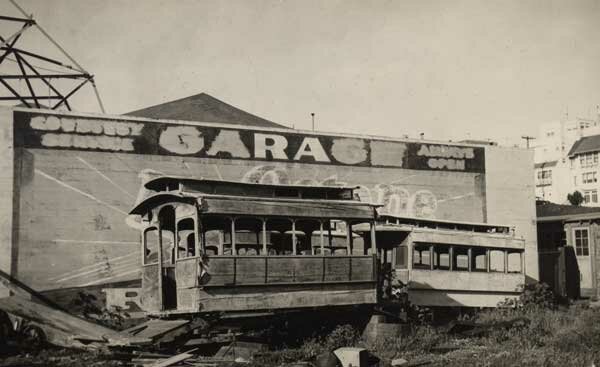 Dennis O'Rorke sent this photo of three old cars that were stored in the Playland-at-the-Beach amusement park in the Outer Richmond in 1945. The Whitney Brothers, who operated Playland, might have planned to display them or make them a part of a ride. Anyone know what happened to them? Car numbers were 4,6, and 9.

Update: Emiliano Echeverria reports that the cars were old trailers from the California Street Cable Railroad Company, and that by the early 1950s they were severely weathered with one collapsed. So the likelihood they rotted in place is pretty high. 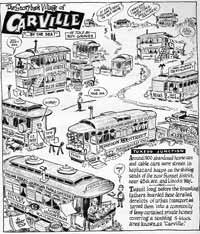 Vicky Walker sent me this scan of an Albert Tolf cartoon on Carville that appeared in his book In Old San Francisco, published in 1960. (Click on the image to see it bigger in a new browser window.)

Tolf drew these cartoons for the San Francisco News. I was aware of the piece but didn't put it in the book because I couldn't figure out the copyright holder. If one speaks up and objects to my using this scan here I'd be happy to take it down. 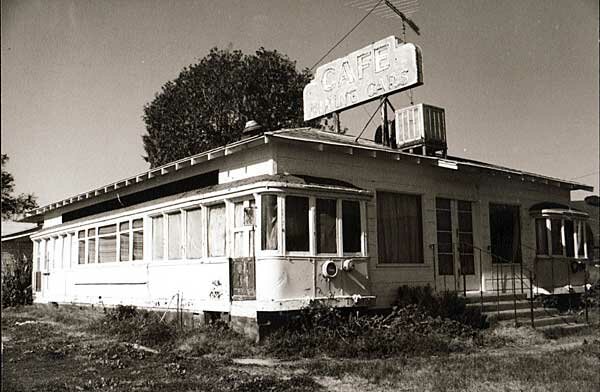 Jack Alter generously donated this photograph he took about ten years ago of the closed diner in Buellton, California that was partially composed of cars from the old Los Angeles Railway. More information on the Dining Cars Cafe.

Axles in the Backyard

Annette Lewis emailed on April 3, 2010 that back in 1992 she was digging vegetable garden beds in the backyard of 1623 41st Avenue and found an old rail axle.

"I couldn't for the life of me figure out where it could have come from and now I know. Thank you for clearing up this mystery!"

Have any other Outer Sunset residents found remnants of Carville in their backyards? Let me know!