Other sources, errata, and perhaps even corrections (gasp) will be added to this page over time. If you have a question, or two cents to toss in,
---Woody LaBounty

A note about color. I added colors to a great many images in the book to highlight the use of cars in structures, to call back to old colorized postcards of the era, and to add to the visual power of the story. Call it an artistic choice.

Cover: This photo (colorized by me) is perhaps the most famous image of Carville, depicting Jacob Heyman's purchased cars adrift in the sand waiting for buyers about 1899. The photographer may have been L.S. Levin, who claimed credit on copy negatives years after the photograph was taken.

Page 3: Mention is made of Century Girl as a design inspiration. Read more about this great book at Laura Redniss' Web site. Rob Keil, who acted as book mentor for me, wrote the terrific Little Boxes book about Daly City's Westlake neighborhood.

Page 4: The graphic of the cable car in the dunes I put together with some old Art Nouveau clip art and a modern photo of a cable car. I made it to use as a chapter-title page image or maybe even the book cover. Neither idea worked out.

Page 6: The San Francisco History Center at the SF Main library has this image in postcard form, published by the "Goldsmith Bros." as "Cartown. S.F. Cal."

Page 14: Warren Hinckle reports (May 2010) that the skeleton cartoon from the 1896 San Francisco Examiner was actually done by the famous cartoonist and caricaturist Thomas Nast, who was doing some spec work for the Examiner at the time.

Page 19: "That arks are coming into favor no one will doubt for it was only in 1890 that they made their appearance in these waters. Then, I believe, there were but one or two in the little cove near Tiburon, which last summer, you might say, abounded with them." ("Arking," by E.W. in The Traveler, April 1894, page 66.) Houseboats around Sausalito became popular in the mid-20th Century and a division of labels between free-floating homes and those on pilings separate houseboats from "arks" now.

Page 22: "...realtor's shed." I have been informed that the term "Realtor©" is actually a trademarked term of the National Association of Realtors. It's supposed to be capitalized with a copyright symbol after it. My Merriam-Webster dictionary let me down on this one and I apologize for the other six realtors in the book. The word didn't even exist in 1895.

Also, sharp-eyed Lorri Ungaretti has found that I switched endnotes 10 and 11 (listed on page 136).

Page 41: The conventional house in the background on the left still stands at 1484 47th Avenue, which makes this view looking north from today's Kirkham Street just east of 47th Avenue.

Page 43: This view is actually looking south from about 47th Avenue and Kirkham Street.

Page 46: For what we think is a photo of one of the cars of the Andrus house being moved, bonus material page.

Page 50: The Vista del Mar actually stood on the east side of 47th Avenue, not 48th Avenue.

Page 59: Included among the wealthy who came to Carville for vacation was the family of Sacramento-area banker Henry John Goethe, who rented a humble car atop the dunes: 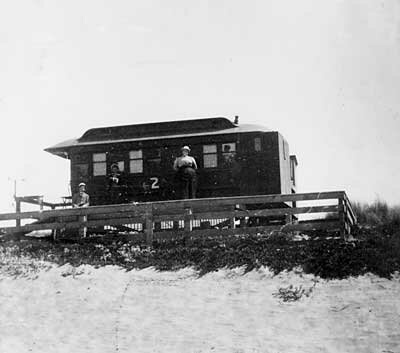 Page 97: Sigh. The caption should read "Detail of the aerial photo on page 116." My apologies.

Page 103: Paula Lichtenberg rightly points out that I implied the Montgomery Block was destroyed (I wrote "gutted") during the 1906 fire. Actually the building held up well and the part of Sutro's library that burned had been moved to a nearby warehouse in an attempt to avoid the flames.

Page 105: Regarding the Emmett O'Brien article in the Chronicle, take a look at the color artwork that went along with it on this site's bonus material page. Oh, and "Emmett" should have two t's. My mistake!

Page 108: Reader Mark Ryser feels I too casually dismissed the import and resulting upheavals and changes because of the San Francisco Graft Trials. On reflection, I agree with Mark. Legal convictions alone can't be the measure of success in shining a light on a corrupt system.